What is Bolt-Cache?Bolt-Cache is a plugin for cPanel, built by the developers at Brixly designed to drastically improve site loading speeds for WordPress (and many other) applications / sites.Brixly uses a unique ‘stack’ for web hosting – by default its incredibly fast, but can be further ‘tuned’ to enhance performance. Bolt-Cache makes that process incredibly simple, with a 3 click interface giving you access to some of the worlds fastest caching technologies.Our ‘Stack’ – Designed for PerformanceA ‘web stack’ is basically software, stack’ed together to serve websites or applications from a web server. Here at Brixly, we have a unique ‘web stack’ which differs from most hosting providers, designed from the ground up to ensure you get only the best performance from your hosting experience.Most hosting providers will either use ‘Apache’ or ‘Litespeed’ as the web server, which is the software which ‘serves’ the applications contents. Instead, we use ‘mod_lsapi’ (The Litespeed PHP Handler) with an event driven Apache as the primary web server, but use ‘NGINX’ (in our opinion, the worlds fastest web server) as a ‘reverse proxy’ to Apache / mod_lsapi.By default, NGINX will be responsible for ‘relieving’ much of the pressure from the Apache service, ensuring that performance and reliability is outstanding. NGINX provides protection from DoS attacks (those which bypass our network level DDoS protection), as well as serving directly the static resources (which it can do significantly faster than Apache standalone). The combination provides outstanding performance with full compatibility with all scripts / applications you would run on a hosting environment.The Results 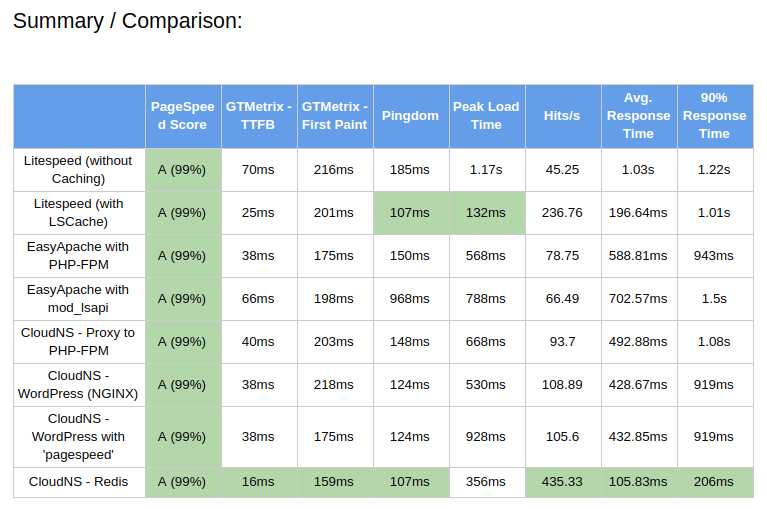 What is NGINX?The goal behind NGINX was to create the fastest web server around, and maintaining that excellence is still a central goal of the project. NGINX consistently beats Apache and other servers in benchmarks measuring web server performance. Since the original release of NGINX however, websites have expanded from simple HTML pages to dynamic, multifaceted content. NGINX has grown along with it and now supports all the components of the modern Web, including WebSocket, HTTP/2, and streaming of multiple video formats (HDS, HLS, RTMP, and others).In short though, its a web server software (similar to Apache), designed to be the fastest web server available today.Why don’t all hosting providers use NGINX?Well, this is a common debate. Litespeed is an incredibly popular ‘Apache’ alternative, quite literally ‘designed’ for the shared hosting market. Its an excellent option which bridges the gap between ‘commonality’ with Apache, but with significantly improved performance. For example, it allows full use of ‘.htaccess’ files, which are common practice for those who already use Apache hosting. It also allows you to use HTTP/2 and a number of performance advantages.NGINX on the other hand has the performance benefits (and more), but doesn’t support .htaccess rules. For this, most hosts avoid the use of NGINX as it does come with some ‘complications’ from both an administrative point of view, and for the users themselves.Where does Bolt-Cache / CloudNS come in?CloudNS is a solution to the above problem, making NGINX available (and its performance benefits) for shared hosting clients, eliminating the ‘complexities’ that can come with NGINX alone. In short, its a platform which allows you to enable ‘native’ NGINX, removing Apache entirely from the ‘stack’ for the sole purpose of drastically improved performance.When a site is configured to use ‘native’ NGINX, the ‘backend’ will change from Apache w/ mod_lsapi to ‘NGINX w/ PHP-FPM’CloudNS is a full featured solution which allows complete flexibility, allowing you to define in significant detail the ‘stack’ which is used to serve the sites / applications on your hosting accounts. By default, CloudNS is also responsible for a number of ‘protective’ layers in the hosting environment, which help us provide one of the most stable hosting platforms available on the hosting market today.Bolt-Cache however is a simplified solution, which offers a ‘stripped down’ set of functionality. We understood that the CloudNS plugin was fantastic for performance, but in some cases a little complex.Bolt-Cache basically offers the most ‘common’ configs / templates in just a few clicks, rather than individually tweaking the settings via the CloudNS plugin.How do I enable Bolt-Cache?Easy! It takes just a few seconds to enable powerful server-side caching for your sites. See the following…You can access the Bolt-Cache interface directly from within cPanel…cPanel -> Bolt-CacheFrom here, select your application / script, such as WHMCS, then choose from one of the caching methods outlined on the interface.

Was this article helpful?